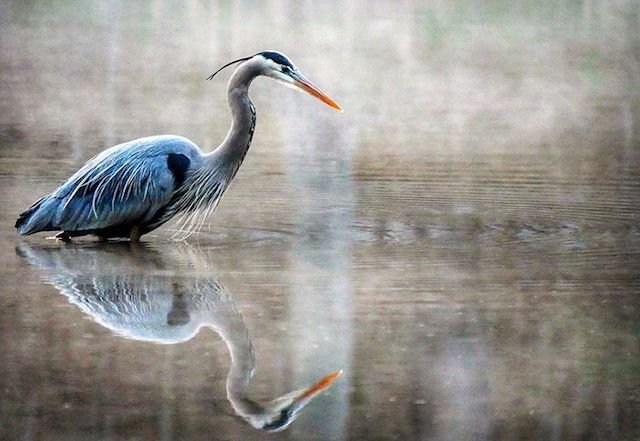 The James River Park System is home to wildlife such as this great blue heron, as well as white-tailed deer, coyotes, foxes, otters, bald eagles and wild turkeys. (Photo by Jay Paul)

“This document was a ground-up effort,” says Bryce Wilk, superintendent of the JRPS. “Everybody has played a part.”

The full plan is available online at jamesriverpark.org, along with and a public survey, open through July 28. This will be the park system’s first master plan in more than 50 years, since before it was fully established.

“It’s important that the public continue to give feedback to the JRPS,” says Katherine Mitchell, president of the Friends of the James River Park board. “The main thing we’re asking is that people help prioritize.”

Notable projects include the construction of a new “greenway” from the historic Pump House at Byrd Park to Huguenot Road, the addition of satellite parking and a potential remodeling of Pump House Park.

A greenway is a trail accessible to walkers and bikers, but not motorized vehicles. The idea, says Wilk, is to protect pedestrians from automobiles. The satellite parking plan involves shuttling river-goers from parking lots in other areas of the city to the parks. 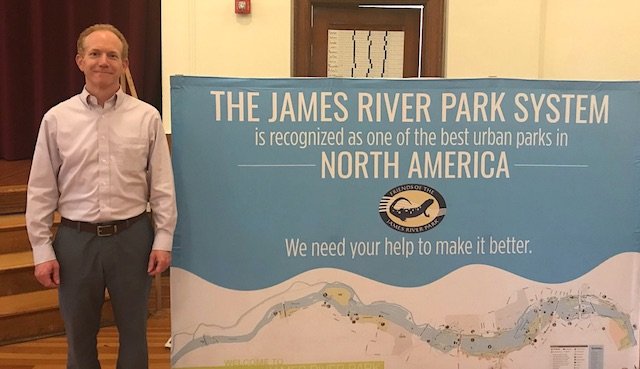 “Remodeling Pump House Park is an opportunity to turn a rich piece of history into a premier destination,” says DeWitt. “That project has been a long time coming.”

Cost estimates were not included in the plan. According to Kirt Rieder, a landscape architect with Hargreaves Associates who helped designed the T. Tyler Potterfield Memorial Bridge, that will come after there has been opportunity for specific projects to be designed.

“Right now, the focus is on hearing what the community has to say, gathering ideas and beginning to prioritize,” he says. “Most of these projects are going to take several years.”

Park system staff and Friends of the JRP board members encouraged attendees to discuss questions and comments afterward.

“I think it’s a very ambitious plan. You have to work the timeline in segments rather than try to tackle the whole thing at once,” says Charles Price, a veteran of the James River conservation effort. “We tried hard to preserve the park from commercial development. We can’t turn it into one of these typical city riverbanks with office buildings and houses. I think this plan is definitely a step in the right direction.”

The potential to expand bike trails appeals to Sarah Starkey. “The more trails that connect, the better,” she says. “When people in different neighborhoods have access to the park … the community is linked together in a way that improves our lifestyle. That way, we aren’t beholden to our cars.”

Kitty Hardt, meanwhile, has a suggestion of her own. “I’ve heard plenty about the parking shuttles and bike lanes,” she says. “I want to hear about a boat shuttle that takes you up and down the river all day. Now that sounds like a whole lot of fun.”